My new book THE BOY AND GIRL WHO BROKE THE WORLD comes out in ONE MONTH (which you can pre-order from all the places), and to celebrate I made a book-inspired PLAYLIST that includes tons of my favorite songs from the Pacific Northwest music scene in the 90’s, which will make perfect sense once you know a little more about the book. 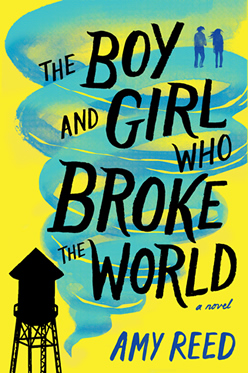 BOY AND GIRL is set in a fictional coastal Washington county called Fog Harbor, which is closely based on Grays Harbor county where my dad (and Kurt Cobain) came from. Billy Sloat, one of the main characters, has an uncle named Caleb who’s the most famous rock star in the world, front man for the band Rainy Day Knife Fight (FYI coming up with fictional band names is the best). At one point in the book, Billy describes his uncle’s music as sounding like “fog and rainstorms and rocks on train tracks and old trees cracking,” which is where I got the title for this playlist. The phrase could also describe most of my favorite music.

I grew up in Seattle in the 90’s and was a music nerd. My family has a strangely close relationship with Kurt Cobain (my cousin was his best friend and Kurt lived with my uncle and family for a while when he left home in high school). Despite this connection, perhaps because of my younger age or my naturally sentimental disposition, I always felt more aligned with the music that came later. Less metal, more melodic. This playlist has both—Nirvana and some of the harder early-90’s stuff, with a lot of the more hipster indie stuff that I fell in love with in the late 90’s.

Kurt Cobain would have probably hated Death Cab for Cutie. He would have probably called them, like Caleb Sloat calls other popular bands in the book, “all those turds with master’s degrees in, like, philosophy and art history [wearing] fucking ties and loafers and fedoras and shit.”

But I think that tension is an important part of the book, and an important part of the music inspired by my home. I come from a place that is full of rain and anger and sadness and a deep mysterious beauty, and there is a long lineage of people who have made very different music and art and literature out of all of these things. This book is a humble attempt to be part of that lineage. Billy Sloat and Lydia Lemon, the heroes of THE BOY AND GIRL WHO BROKE THE WORLD, are trying, like we all are to some extent, to make something beautiful out of their pain. As am I.

I’ll just say, if you only listen to one song on this playlist, it should be Hoquiam by Damien Jurado, named after my dad’s (and Damien’s, and maybe Lydia Lemon’s) hometown. If there is one song that sounds like the Washington coast on a cold wet cloudy day, it’s this.

Also, Don’t Touch My Bikini, by the Halo Benders. Because it’s awesome.

THE BOY AND GIRL WHO BROKE THE WORLD Playlist

Yes, I went a little overboard. As I said: music nerd.