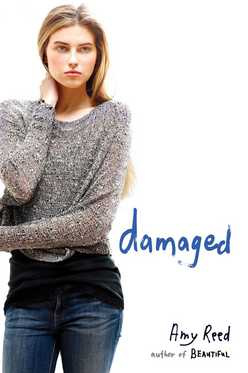 After Kinsey’s best friend Camille dies in a car accident during which Kinsey was driving, Kinsey shuts down, deciding that numbness is far better than mourning. All she wants during the last few weeks of high school is to be left alone, but Camille’s mysterious boyfriend, Hunter–who was also in the car that night–has different ideas.

Despite all of Kinsey’s efforts, she can’t outrun Camille, who begins haunting her dreams. Sleep deprived and on the verge of losing it, Kinsey runs away with Hunter to San Francisco. As they drive across the country, trying to escape both the ghost of Camille and their own deep fears, Kinsey questions all she once believed about her friendship with Camille. Hunter, meanwhile, falls into a spiral of alcoholism, anger, and self-loathing. Ultimately, Kinsey and Hunter must come to terms with what they’ve lost and accept that they can’t outrun pain.

** Read an Excerpt of DAMAGED Here **

Addiction, trauma and mental illness are all handled deftly here . . . Haunting, in more ways than one.”
Kirkus

Reed presents a thoughtful portrait of survivor’s guilt and road-trip story about taking the risk of shedding one’s past.”
Publisher’s Weekly

Kinsey and Hunter’s grief is dramatic but not overblown, and readers will root for their healing, even when they take a metaphorical wrong turn along the way.”
Booklist

Reed offers a well-plotted and excellently written meditation on grief, loss, and the power of new beginnings in this striking novel about two wretched characters trying to make themselves whole.”
School Library Journal

Damaged Interviews and Other Fun Stuff